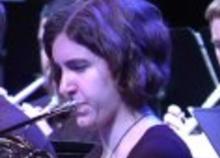 As part of the commission guidelines, our featured composers were asked to write music that somehow referenced the literary arts. O'Neal Douglas chose not to take this charge so “literally,” and subsequently wrote a piece based on the literary device of allusion.

We all learned in high school literature class that allusion is a means by which the author indirectly refers to something the reader already knows. This knowledge is thereby used to add greater meaning to what he/she is saying without going into a lot of detail. For example, in A Merchant of Venice, Shakespeare's heroine, Portia, exclaims, “If I live to be as old as Sibylla, I will die as chaste as Diana, unless I be obtained by the manner of my father's will.” The
Cumaean Sibyl of Roman myth lived a thousand years. Diana was the Roman goddess of the hunt and of chastity. Portia is saying in this quotation that even if she lives a thousand years, she will be chaste until she marries the man her father prefers. In this case, the man who solves the riddle her father has posed for those seeking her hand.

In Two Allusions for Brass, Percussion and Piano, Douglas adds greater meaning to his work by making subtle, indirect references to the compositional styles of other prominent wind band composers. His influences include a diverse collection of composers whose music was experienced through performance and/or literature studies, as well as private studio instruction.

Movement I. “Points”, is characterized by thinly textured ideas intermingled with explosive sections, often presented in a pointillistic manner. The character of this movement is also defined by parallel harmonic motion, with the majority of the harmonic language consisting of clusters and other 20th century devices.

Movement II. “Patterns”, is based on a simple rhythmic pattern that is developed into larger ideas or sections, by the use of various compositional devices. Rhythmic ideas fuel the beginning of the work until more melodic ideas lead to a vocal section in the middle. The rhythmic ideas eventually come back into play to end the work.